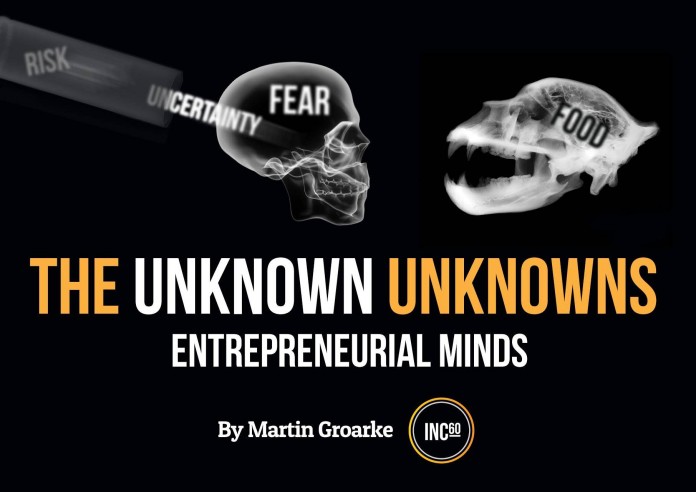 Risk and uncertainty are commonly used and often confused words. Risk is definitive. It’s based on hazards that are known and measurable. Therefore risks levels can be quantified and the individual risks mitigated. Uncertainty occurs if hazards are hidden, opaque or generated in more complex and longer term ways.

Former US Secretary of Defence Donald Rumsfeld famously stated that the threat facing the United States was greater than the intelligence picture available, because while the country could determine the risks it faced, uncertainty could not be quantified;

People forget that Rumsfeld’s career in Washington dates back to Richard Nixon’s presidency. He was Secretary of Defence under Gerald Ford in the mid-1970s and then reappointed to the role by George W. Bush in 2001. Although his remarks drew laughter and mocking, his insights were based on decades of experience.

If you prefer to listen than read, here it is in audio format

To worry about risk and uncertainty you don’t need responsibility for 2 million military and civilian personnel, a further two million retirees, or 5,000 locations spread over 30 million acres around the world. Informally, we all calculate threats and opportunities throughout our daily lives – in the home and at our place of work – in the decisions we make and the steps we take.

At Inc60™, we recently interviewed Kevin Kelly on his Xceptional Execution methodology. Among the many questions asked, we wanted to know about the risks and uncertainty of taking the plunge into entrepreneurship. We asked about the fear of what would happen should your cash flow splutter. Suddenly you’ve got to go home and tell another person that you can’t pay the mortgage this month.

Kevin dismisses any talk of failure in his usual forthright style, declaring “there’s no 50% ‘what-ifs’ in this game. It’s conviction, belief, passion, energy.” Kevin tells us that “all entrepreneurs need to, and will develop, the art of becoming comfortable in the uncomfortable.” While the absence of information worried Rumsfeld, Kevin Kelly warns that knowledge should not be used to manufacture reasons to avoid doing. Kevin sees the importance of following your gut or intuition and “just doing”. His best defence and hedge against the risk of failure is the concept of Xceptional Execution, which is a methodology for business excellence.

The methodology rests on four rules for success. Firstly, being attentive to your customers’ needs. Secondly, knowing yourself, with, thirdly, a commitment to lifelong learning. Fourthly and finally – doing.  Kevin talks about the entrepreneurs he has seen achieve success through the “very strong mentor network around them that had been at the top of the mountain and did see the journey as it was and was able to help them along the way.”

If you’re in business then you probably have many hats. At times you’re an amateur lawyer, IT specialist, tax advisor or sales & marketing manager. There’s so much you know, and more you know you don’t know. At Inc60™ we’ve held events on topics such as data protection, legal contracts, and converting website traffic into sales. Our podcast series includes talks on intellectual property law, intrapreneurship and the mechanics of sourcing B2B goods from China.Our podcasts are delivered in an upbeat style featuring successful entrepreneurs and leading international subject matter experts imparting the wisdom they’ve gained down through the years. Whether you listen in the car, on the train or on the go, they’re sure to help you on your way. On the road you’ll meet all sorts, but in spite of the risks, and as Kevin Kelly assures us, “the journey always brings you to a place that you describe and recognise as better than your starting point.”

Kevin Kelly (Kevin Kelly Unlimited) is an internationally acclaimed keynote speaker on leadership, motivation, sales, entrepreneurial thinking, entrepreneurship and customer service. Kevin devised the Xceptional Execution (XE) methodology and authored a bestselling book of the same name. He spoke to Inc60™ in Galway, Ireland. The podcast interview is available on the Inc60 podcast app, which can be downloaded now from the Apple and Google Play stores.