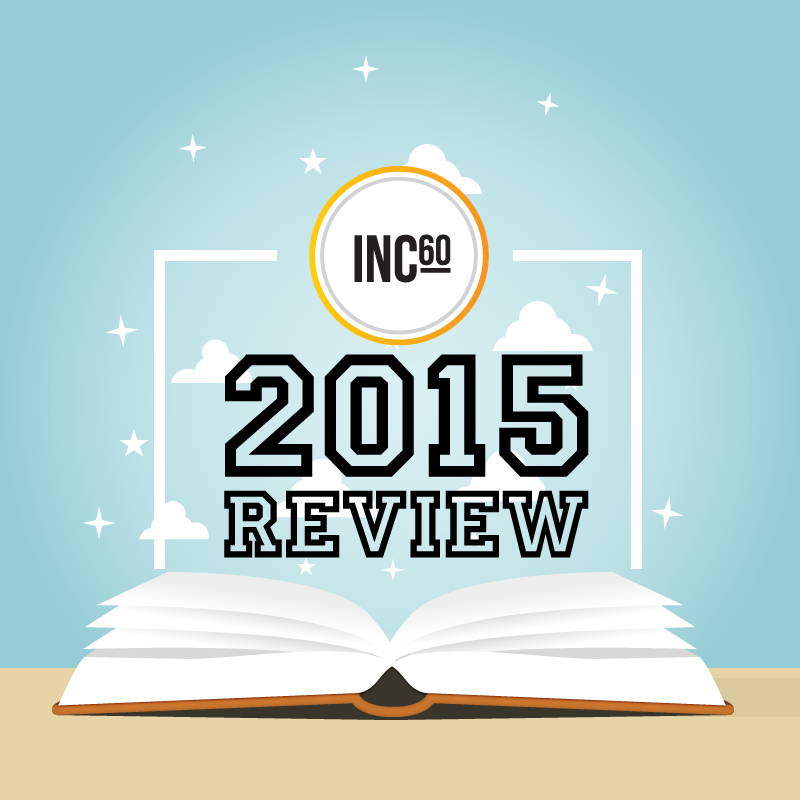 Two million people March in Paris during the aftermath of Charlie Hebdo attacks while trouble flares up again in Eastern Ukraine. Inc60™ begins the year by building on the positive feedback from Inc60™ Live events in 2014. The format is refined throughout the early part of the year into a repeatable and marketable service by the latter half of 2015.

Conor McGregor wins his bout in Boston after just two minutes. His stock continues to rise throughout 2015. In the tranquillity of beautiful Westport, Harry Hughes, CEO of PortWest, hosts an Inc60™ Live session and delivers a talk on sourcing from China. The podcast is available on our website and app. It’s still our most popular talk.

A two man cockpit rule is introduced among many airlines after Andreas Lubitz flies his Germanwings Airbus A320 and almost 150 passengers into a French Alpine mountainside. It turns out that Hillary Clinton was using a personal email account for official business while Secretary of State. Fox have only been discussing the matter for 9 months. It feels like 9 years. Meanwhile, Niall Devitt of Tweak Your Biz tells Inc60™ Live how to convert web traffic into sales.

The pre-fight hype is a distant memory. The fight itself is long forgotten. In May, Inc60™ joins over 3 million people in the Mayo global diaspora to celebrate Mayo Day.

Canada hosts the FIFA Women’s World Cup. Inc60™ spends much of the summer developing our new website, which we launch in the autumn. We give ourselves an A1.

Cuba and the United States restore ties, while Iran signs up to a historic nuclear agreement. Businesses in Mayo are also busy learning to craft legal and diplomatic language. Myles Staunton, a commercial lawyer, delivers an Inc60™ Live talk on key legal contracts at the Innovation in Business Centre (IiBC) in Castlebar. Key Google technical services provider Lionbridge Technologies hosts an Inc60™ Live session in Ballina – sponsored by the Mayo County Council Enterprise & Investment Unit. Data Protection is the topic and Robert Haniver of Mason, Hayes and Curran does not disappoint. Somebody registers to attend under the name Edward Snowden. Although we honour the booking, Edward never appears.

August – People on the Move

The Migrants Crisis intensifies across Europe. At Inc60™ we make tracks by releasing our podcast app in August. Pride. Elsewhere, ISIS destroys Palmyra, three Americans give a terrorist a hiding on a French train and Alexis Tsipras squares up to the EU – and loses.

Tony Abbott and the Afghan city of Kunduz fall in September. Acclaimed International Key Note Speaker Kevin Kelly talks to us about his book ‘Xceptional Execution.’ We interview Colm Lyon, founder of Realex payments at the 2015 Spirit of Entrepreneurship Awards in GMIT Castlebar.

October – We focus on USA but underestimate Argentina

China’s One Child Policy ends. The victorious Six Nations champions are comprehensively outplayed in the Quarterfinals of the Rugby World Cup. Inc60™ kicks off its Doing Business in America series with a talk sponsored by Mayo County Council Enterprise & Investment Unit at the Innovation in Business Centre (IiBC). Susan Stipa, President of strategic marketing firm McDay and Bill McLoughlin, Chair Emeritus of the Irish-American Business Chamber and Network in Philadelphia teach participants how to test the market in the USA. Later in the series Cyril Walsh talks selling food and beverages into the U.S. with Mary Rogers of Stateside Solutions. The discussion is available on our podcast app. There you’ll find our interview with John McGuire of Active Mind Technology. John talks about relocating to Silicon Valley, getting investment for GameGolf and putting GameGolf in the hands of Barack Obama.

Inc60™ is split in the aftermath of the Paris attacks. Reactionary passions are ignited for some, while others seek deeper answers to the problem of conflict. Inc60™ staff work on various projects for 3rd parties. We write a 40 page report for two organisations and develop a website for another. We also run an Inc60™ Live session at the Bank of Ireland Start-Ups Workbench in Galway. Oh, and we create audio podcasts from submissions to Congregation 2015. We think we have invented the word Blogcasts, which are really short podcast versions of blogs. Then we find the word is already in the dictionary. Former Google and Apple exec Ellen Petry-Leanse kindly allows us to record her wildly successful, viral “Just say No” blog in blogcast form. With millions of views already, it was sure to be a hit in audio form too.